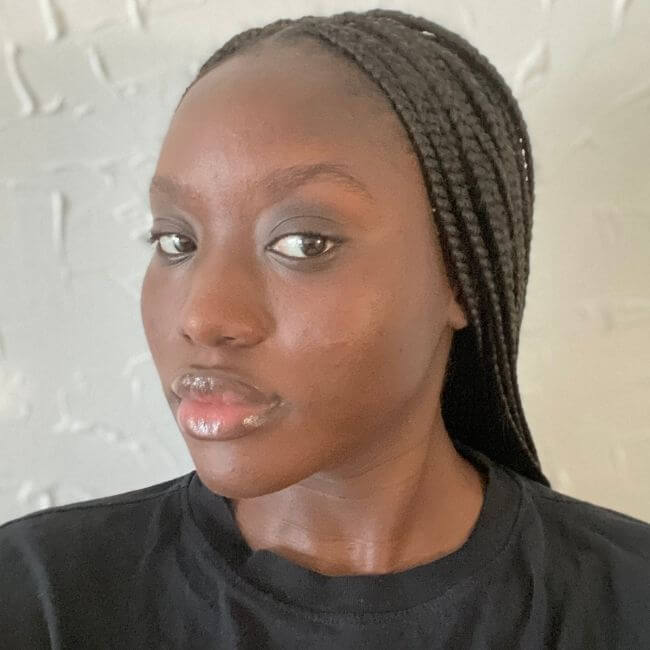 Can you tell the difference between "I have blue circles because I'm sleep deprived" and "I have dark spots under my eyes"? In fact, these are two very distinct skin problems. The first is related to a poor lifestyle (lack of sleep, smoking, alcohol, etc.) and the second to hyperpigmentation of the skin.

It is not insignificant to note that it is pigmented skin and mainly black skin that suffers from these hyperpigmentation spots called pigmentation rings. It is therefore important to understand how these dark circles appear in order to determine how to treat them effectively.

What is a dark circle ?

A dark circle is a change in the natural color of the skin under the eye. This can be accentuated by a shadow effect caused by the creation of a hollow under this area or, conversely, a swelling (a pocket).

Know the different types of dark circles on a black skin

Black skin is mainly affected by the appearance of dark circles under the eyes. This skin color is more intense than their natural skin tone and appears mainly on the lower and/or upper eyelids, but it can also extend to the malar and temporal regions and the lateral nasal root. With a prevalence of 30.76% and benign in nature, these dark circles are perceived as unsightly and are considered complexing because they give the patient a tired look. They are therefore a reason for dermatological consultations.

These "pigmented rings" are defined as "pigment spots" because they are both caused by hyperpigmentation of the skin due to an overproduction of melanin pigments (eumelanins, brown pigments in black skin).

It is possible to see the appearance of a furrow under the lower eyelid in black, brown and mixed skins. This hollow ring is mainly caused by the melting of fatty tissue under the eye. It appears mainly with age because it is related to the natural aging of the skin, but it is possible to perceive it when younger because it is also hereditary.

Clinically, it differs from pigmented dark circles because it appears as structural shadows formed by the anatomical contours of the face.

Among the different types of mixed dark circles, the pigmentary-structural mixed dark circle is the most common in black skin. It is characterized by a dark eye contour that is accentuated by a hollow of the lower eyelid. In other words, it is a hyperpigmentation of the skin associated with a loss of fat.

What causes dark circles under the eyes ?

Dark circles are named constitutional because they are frequently seen in several members of the same family. However, genetic conditions are not necessarily congenital (present at birth). The genotype is fixed at conception, but the phenotype may not manifest itself until puberty or adult life, most commonly between the ages of 16-25. Little scientific data exists to understand specifically which gene or allele is involved in causing the appearance of these pigmented rings.

During a period of stress, the adrenal gland will secrete a significant amount́ of cortisol (hormone that allows the body to resist stress), but when this period of stress is prolonged, the adrenal gland becomes exhausted, which causes a hormonal imbalance. The ACTH hormone will then increase to stimulate the production of cortisol. The ACTH hormone can also activate the alpha-MSH hormone (the hormone that causes melanin secretion). This is how a period of high stress can lead to the creation of hyperpigmentation spots and dark circles on the skin.

During pregnancy, the production of sex steroid hormones (estrogen, for example) naturally increases. These same hormones can also be increased by taking a contraceptive pill. This hormonal change can lead to the appearance of melasma (pregnancy mask) or brown spots around the eyes. Indeed, when overproduced, these sexual hormones are able to overactivate melanocytes by activating the ACTH and/or alpha-MSH hormone in excess.

The eye contour is a specific skin area. The skin is thinner, more sensitive and more reactive. Thus, it is possible to see dermatoses such as contact eczema (allergy), atopic eczema (chronic) or psoriasis of the eyelids. The healing of these conditions is highly likely in black skin to lead to the creation of pigmentation spots and/or dark circles. Indeed, many cytokines and other inflammation mediators also have specific receptors on melanocytes. Thus, as soon as the skin is attacked (dermatitis or friction), their strong presence can generate an overactivation of melanogenesis and thus create a spot.

Black skin is also sensitive to the harmful effects of the sun. One of these effects is the appearance of hyperpigmentation spots. The sun emits UVA and UVB rays that can penetrate the skin and activate the alpha-MSH hormone. This activation leads to the preferential production of eumelanins (brown pigment melanin with a photo protective role). This is called the tanning mechanism. However, it is possible for this mechanism to be deregulated and overactivated, resulting in hyperpigmentation spots or dark circles depending on the location of the spot.

How to safely remove dark circles ?

Removing dark circles around the eyes is like treating a brown spot on the skin.  Through our expertise, we have been able to demonstrate that a hyperpigmentation spot on black skin is different from a spot on Caucasian skin. The ratio of eumelanins (melanin with brown pigments) to pheomelanins (melanin with light pigments) is important to take into account in order to treat them effectively and avoid a rebound effect of the spots on the skin. 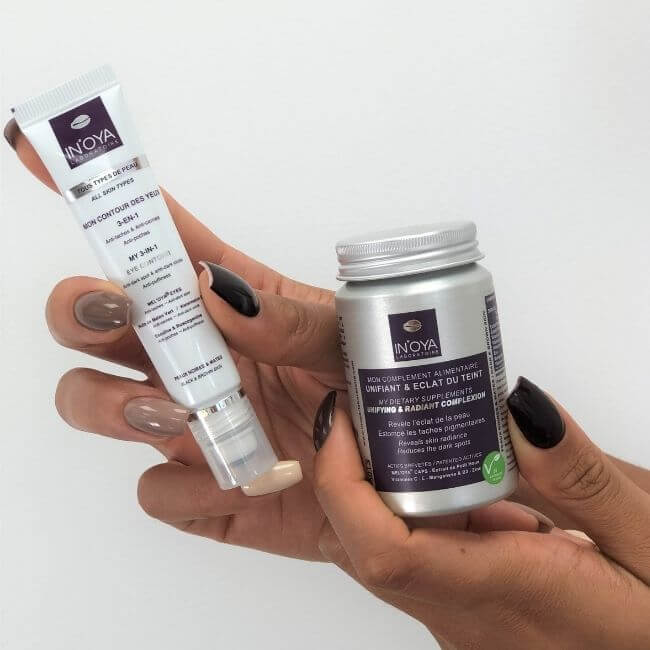 To eliminate dark circles under the eyes, we have developed a new anti-spot technology MEL'OYA EYES ®. Its active ingredients aim to select overactive melanocytes and block the key enzymes responsible for the appearance of hyperpigmentation spots: tyrosinase and tyrp 1.

Thus, we guarantee effectiveness from 28 days of use on your dark circles.  Present in My  3-in-1 Eye Contour  "Anti-dark spot, dark circles, puffiness", this eye contour care effectively treats brown spots on the eyelids while respecting the sensitivity and needs of the skin (hydration, regeneration etc.).

In addition, thanks to the MEL'OYA CAPS® anti-spot technology present in My Dietery Supplement Unifying & Radiant Complexion, you will benefit from the advantages of nutricosmetics on your dark circles. Indeed, its patented active ingredients such as holly extract can act directly from the inside on your black eye contour thanks to its anti-tyrosinase and anti-tyrp 1 actions.

The objective of this IN & OUT treatment is to obtain a synergy of complementary actions guaranteeing you an optimal efficiency on your dark circles and this WITHOUT DANGER.

Chemical peels are recommended to treat the appearance of hyperpigmentation spots present on the skin of the face and/or body. Indeed, the exfoliation created eliminates the hyperpigmented dead cells, which promotes cell renewal. This boosts the effectiveness of the active depigmenting ingredients of the anti-spot treatments applied.

However, we would like to issue a warning about this common practice which, depending on the acid used (e.g. glycolic acid), can be harmful to black skin and subsequently create new post-inflammatory spots. Furthermore, as previously mentioned, the eye contour area is a very sensitive area and we do not recommend that you further sensitize it with an exfoliating peel aimed at treating dark circles.

Aesthetic medicine proposes the use of laser or pulsed light for the treatment of hyperpigmentation spots. Indeed, the light pulses penetrate the skin and destroy the clusters of melanic pigments in order to eliminate the stain. It also aims to boost cell renewal during the healing of the skin.

Just like the application of a peel, we would like to warn you about the use of lasers that are not specific to black skin, especially around the eyes, because they could damage and sensitize your skin and consequently create new spots or post-inflammatory pigmentation rings.

How to avoid dark circles ?

You are not a member of the OYA Club