Do you have dry, rough skin with, to the touch, small pimples mainly on the back of the arms or thighs? It is indeed keratosis pilaris.

It is also called keratosis follicularis or follicular keratosis by scientists and "strawberry skin" or "chicken skin" in common parlance.

Often judged as unsightly and unattractive, it sometimes becomes a real complex for people with this dermatosis.

Due to their characteristics and skin genetic specificities, black, brown and mixed race skins are particularly affected by keratosis pilaris.

This article will help you understand keratosis pilaris in detail so that you can eliminate it effectively.

Keratosis pilaris is characterized as a skin disease:

Scientifically, the causes of keratosis pilaris are still not clearly defined. Genetically, they are linked to various hereditary mutations or acquired metabolic disturbances in the cell signaling pathway linked to the RAS protein.  Keratosis pilaris could also be caused by hormonal imbalances or be considered a side effect of certain medications.

Histologically, keratosis pilaris is a hyperkeratinization of the stratum corneum. In other words, it is caused by an overproduction of keratin in the most superficial layer of the skin.

How to recognize keratosis pilaris?

There are different types of keratosis pilaris.

Simple keratosis pilaris, the most common

Simple keratosis pilaris is characterized by dry skin with the presence of small hard keratotic pimples in the shape of a pinhead. They are to be distinguished from acne pimples. Keratosis pilaris gives the skin a granular appearance and an uneven tone, hence its nickname "chicken flesh". It appears mainly on the back of the arms or thighs but sometimes also on the buttocks and cheeks. At this stage, it is not painful but it can be itchy. 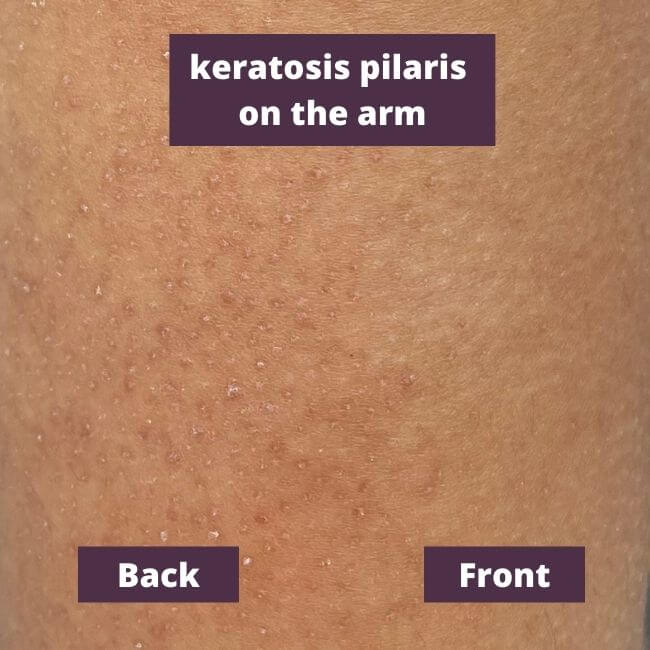 Red keratosis pilaris is caused by repeated and aggressive scratching of a simple keratosis pilaris. This creates a release of cytokines and an inflammatory response on this keratotic plug which causes the appearance of redness and/or inflamed spots.

Acquired keratosis pilaris is associated with or follows other skin conditions such as psoriasis or eczema.

Who is affected by keratosis pilaris?

Keratosis pilaris generally affects children and teenagers. With age, it can disappear naturally, manifest itself in the form of recurring attacks or persist over time.

Indeed, pigmented skins are naturally dry because they lack ceramides on the surface of their skin. This lack of skin lipids also accentuates its dehydration. Thus, clinically, dark skins very often have a rough skin with a scaly aspect.

In addition, dark skin regenerates 2.5 times more slowly than Caucasian skin. Serine proteases (enzymes responsible for skin peeling) are less active on pigmented skin because it has a more acidic skin. As a result, dead cells will have a strong tendency to accumulate and clog pores. The skin is then naturally thicker and rougher to the touch.

These genetic characteristics explain in part why black, dark and mixed race skin is more prone to Keratosis pilaris. In addition, this dermatosis is more visible in darker skin types because the affected area can become hyperpigmented.

How to treat keratosis pilaris on black, brown and mixed skin?

Is keratosis pilaris a reason to consult a dermatologist?

The diagnosis of keratosis pilaris is clinical. It does not require any specific examination and is based mainly on simple observation of the skin with the naked eye.

If it is a simple or atrophying keratosis pilaris, there is no specific and definitive treatment to date to effectively treat it and avoid any recurrence.

However, if the keratosis pilaris is inflammatory or associated with another dermatosis such as eczema or psoriasis, the advice of a dermatologist is important in order to calm the inflammation and the associated dermatosis.

Overall, keratosis pilaris is a benign and painless dermatosis. It is mostly considered unpleasant and unsightly because of the appearance of the skin. It can be a source of discomfort for some people. 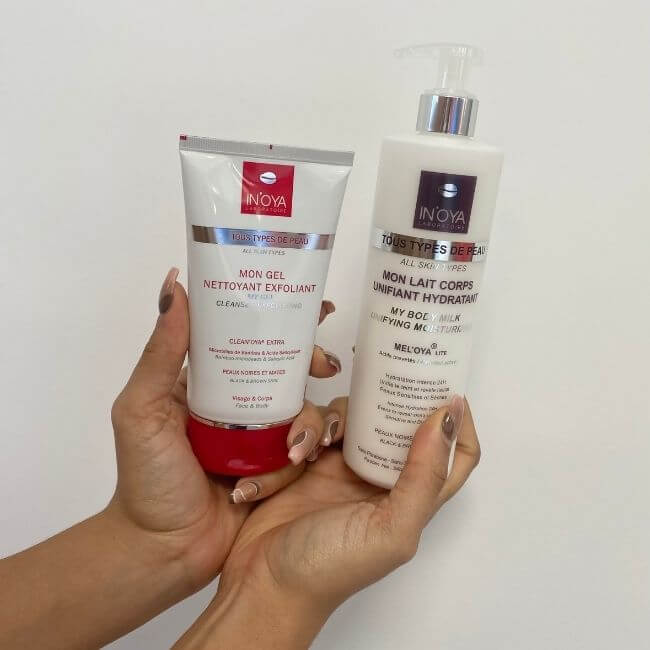 It is quite possible to reduce keratosis pilaris with cosmetic treatments. The objective is to be able to recover a clear and smooth skin in order to improve the quality of life of affected subjects.

Among many molecules, it is advisable to use :

You are not a member of the OYA Club

Take off of favourites

The element has been deleted from your favourites

The element has been added to your favourites


You are not a member of the OYA Club